Plate Full of Sgadan is also a cover, kind of. Musically it’s Brimful of Asha by Cornershop but the lyrics are completely different. I’ve been told that younger listeners have occasionally got confused when they hear the original, perhaps assuming it’s some sort of strange tribute by Peat & Diesel fans.

In some ways Plate Full of Sgadan is a typical Peat & Diesel song, in that the band quite often cherrypick from other people’s music – usually it’s Scottish folk tunes, but the opening of Lovely Stornoway is clearly Summer of 69 by Bryan Adams and I hope his lawyers never hear it or they might be in trouble. What’s interesting to me about Plate Full of Sgadan though is that, culturally, it does something very similar to the Cornershop song.

Brimful of Asha is full of very specific Indian references. It’s named after Asha Bhoslie, a ‘playback singer’ for Indian films, who sang thousands of songs that would then be lip synced by the films’ stars. The song refers to her as ‘sada rani’, which I’m told is Punjabi for ‘our queen’; the lyrics also mention Lata Mangeshkar and Mohammed Rafi, two other playback singers. If you didn’t know all this, the song won’t make a huge amount of sense but, crucially, it doesn’t attempt to explain itself. It exists on its own terms, and if you don’t know what it’s about then you can go look it up.

Brimful of Asha was released in 1997, the year Tony Blair won his first general election victory, partly by piggybacking on Britpop, which by that time had evolved into a widespread, nostalgic and quite conservative celebration of British culture. When it comes to Britpop I’m generally with Tracey Thorn, who has pointed out how, in the eyes of politicians and the media, “the white boys with guitars were the Norm, and deviations from that were the Other, and certainly not the main story”. Ask most people to name a ‘Britpop’ musician and they’ll say Blur or Oasis, maybe Elastica or Pulp if they’re trying to impress you. But not many people would namecheck Tricky, Goldie, or Massive Attack, at least not if they’re white. So Brimful of Asha felt significant, especially after Norman Cook remixed it and made it a proper hit. It was still boys with guitars but one of them was a British Asian boy and the song stood out because of the way it casually blended these dual identities together.  It was a different, more inclusive kind of Britpop.

Part of the reason I liked this was my own mixed heritage. I am half Scottish and it was always a source of irritation to me that something called ‘Britpop’ was so overwhelmingly English. Even Trainspotting, the 1996 film adaptation of a hugely significant Scottish book, had a soundtrack dominated by English musicians – Blur, Sleeper, Pulp, Elastica, Underworld etc – with room for only one Scottish band, Primal Scream.

In the years since, though, something transformative happened in Scottish pop music, beginning in 1996 with Arab Strap’s The First Big Weekend. I still remember the first time I heard that song. Like a lot of people of my generation, I associated Scottish accents in pop with politics and the Proclaimers. This was something different, a song in which a young guy from Falkirk basically just blethered for a while about ordinary stuff – dancing, drinking with his pals, watching a football game and the Simpsons – and, just by doing it in a Scottish accent, with a throwaway reference to the Arches in Glasgow, made it feel exciting and subversive, especially in the midst of a big English cultural moment that was being sold to us as British. What was striking, again, was the casualness of it. Why would you not talk about your life in this way, with your own distinct cultural references alongside ones from the ‘mainstream’, dominant culture? I heard the same quality in Cornershop a year later, and I hear it in Peat & Diesel now when they sing about herring and Big Macs.

These days, of course, it would be conspicuous if a Scottish band didn’t sing in their own accent. The bands that followed in Arab Strap’s wake – Frightened Rabbit, the Twilight Sad etc – have made it normal. And The Proclaimers, notably, are considered to be much cooler than they once were. (It feels culturally significant that, when Trainspotting 2 finally came out, Young Fathers were by far the most prominent band on the soundtrack. Young Fathers are, in lots of ways, a checklist of all the things that were missing from Britpop and that first Trainspotting soundtrack. They’re from Edinburgh, two of their line-up are black,  and none of them plays guitar. They have also collaborated with Massive Attack. I doubt the choice to put them on the soundtrack was that calculated – they’re also one of the most thrilling bands of any kind in Scotland – but Tracey Thorn would surely approve.)

In some ways, then, Peat & Diesel are nothing new. But they are doing for Scottish pop music what both Arab Strap and Cornershop once did for Britpop, in that, with their distinctly Hebridean (and also working class) references, they give a voice to a different kind of Scottishness. Instead of Asha Bhoslie and Lata Mangeshkar, Plate Full of Sgadan namechecks marag dhubh, the local minister, and “Shauny Beag from Carloway”. And the opening lines about Sunday dinner with Granny before church will have a particular resonance for anyone who grew up on Lewis. But like Brimful of Asha, Peat & Diesel songs don’t feel the need to explain themselves, they just are what they are. If you get the references, great. If you don’t, you can go look them up. It’s been lovely to see people all over the UK discovering and embracing Lewis culture through this band, and it was gutting that the lockdown happened just as Peat & Diesel were on the point of properly breaking through.

It was the lyrics that drew me to the song, especially this bit towards the end: “I know it isn’t normal and I know it isn’t right, any average man would get a fright. My head is in the clouds and my guts are on the deck, it’s seven hours to go until I lose the sweats.” Firstly, that’s a fantastic lyric, like something Morrissey would write in the glory days of The Smiths (and yes I’m well aware of the irony of name checking Morrissey here, given what he later became). But secondly I had many questions. Why seven hours specifically? At very least it suggests a long relationship with comedowns. But what is he hiding from in his granny’s loft? What is he running away from with those magic mushrooms? Did something bad happen in the city that made him not like it? Is there a deep melancholy at the heart of Peat & Diesel that isn’t being talked about, and that someone who mostly writes sad songs could tease out?

I’m possibly reading far too much into this. Keith, Peat & Diesel’s producer, told me people are always asking him questions about details in the band’s lyrics and that the answer is quite often ‘because it rhymes’. But I thought it would be fun to find the sadness in the Peats, and so, while bored in the middle of lockdown, I posted a very sketchy version of the song online. Since Lewis is a small place it got noticed by the band quite quickly. One response from a Peat & Diesel fan stuck in my mind: “He sounds like he needs a whisky.” And they were right. It was too sad. Teasing out the melancholy in a Peat & Diesel song is one thing; making it depressing is another. 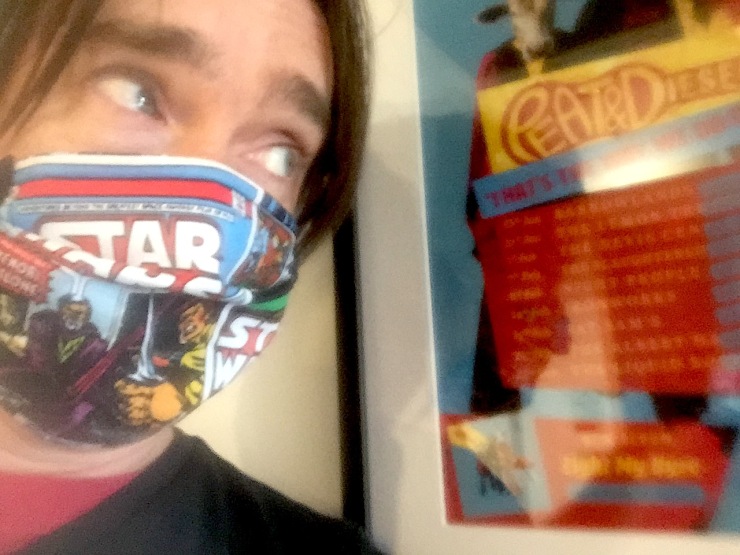 For the final recording, then, I added a rousing, anthemic second half with stamps, hand claps, and a completely different tune that I wrote myself. I like to think this is in the spirit of a band who take such cheeky liberties with other people’s music. I added a wee bit of Plate Full of Sgadan at the end, a tribute to their tribute. I hope they like it. I also hope they don’t mind that I recorded it in the same studio, with the same producer, where they made their first two albums. I got a bit of a kick out of that, I admit, and couldn’t resist taking a wee selfie in front of their tour poster.

(Update: I am also now signed to Peat & Diesel’s label, Wee Studio; it’s funny how things turn out. I’m not expecting a support slot any time soon though; that would be a terrible idea for all concerned).

For the record, I don’t think Sad Country Boy is anywhere near as good a cover version as Plate Full of Sgadan is. It’s probably another example of my tendency to critique pop music – at some length, as you may have noticed – rather than fully embrace it. But I’m quite pleased with it, especially the stamping and the handclaps, a multi-tracked me, jumping up and down and feeling very happy.