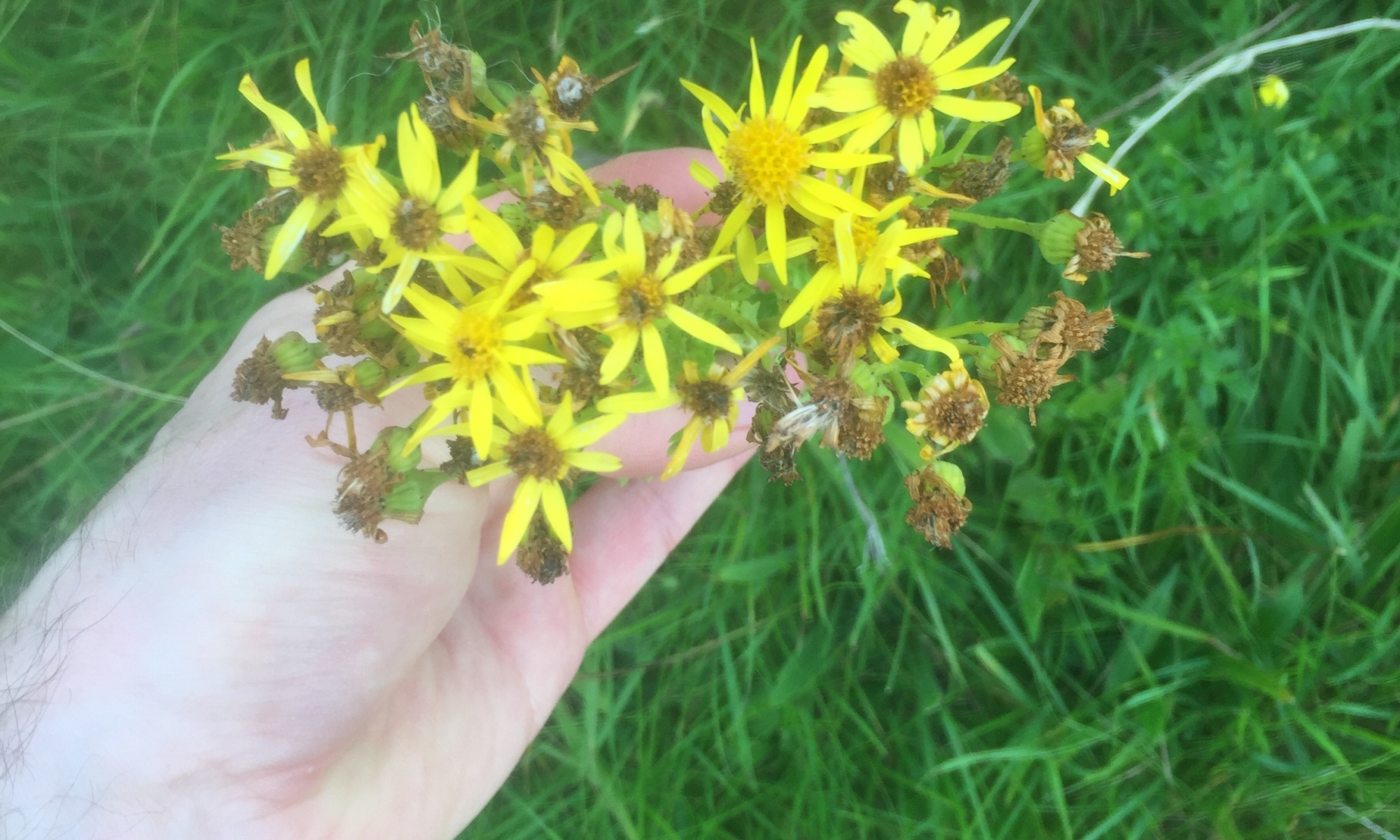 Pulling ragwort on the Sabbath is the first song I’ve written about living on the Isle of Lewis. In fact, it’s one of only two songs I’ve managed to finish since I moved here two years ago – both of which appear on a new EP that I just recorded at Wee Studio in Stornoway.

I did wonder about the title, given local religious sensitivities. Without it, though, I would basically have had to unwrite the entire song – a year’s worth of musical output, effectively – so I decided to keep it but write an explanation, and here it is.

As the lyric says, the song is a collection of ‘thoughts that go through my head as I’m pulling ragwort on the Sabbath’. Soon after Laura and I bought a croft here we discovered it was infested with ragwort, which, as any crofter knows, is toxic to sheep. The only way we’ve found to get rid of it without ruining the soil is to uproot it, flower by flower, which I did. Until the lockdown, though, the only day I could spend any amount of time pulling ragwort was the day when I wasn’t working – ie: Sunday, when according to some people you’re not even supposed to hang out your washing on the Isle of Lewis.

I was conflicted about this. While I’m not at all religious, I like and respect the fact that a lot of my fellow islanders want to keep Sunday special. I find it a huge relief from the insidious modern pressure to work and consume more or less constantly. Since I moved here I have made it a rule never to read work emails on a Sunday, and am happier as a result. Taking time to slow down, rest, and reflect is essential for human health. In fact, there are artists who, for different reasons, are currently exploring the idea of ‘rest as resistance’, such as Tricia Hersey and Toni-Dee, whose work I discovered recently via Emma Jayne Park, associate artist for the Scottish Mental Health Arts Festival. Tricia Hersey is founder of the Nap Ministry, an organisation formed to explore “the liberating power of naps”, and recently took what she described as “an impromptu three-week Sabbath” in support of the Black Lives Matter protests. Toni-Dee’s work talks of “a push back against ableism, turning the weary body from an engine for capitalism into a site for rest and repose”. Emma herself is devoting much of her time to finding ways of ‘moving slowly’ in her work as a response to changes in her physical health.

It irritates me that arguments over Sunday openings are often caricatured as a fight between ‘progressive’ people and religious fundamentalists who want to chain up children’s swings. What is so progressive about non-stop work, non-stop consumption, and a benefits system that often seems designed to punish and stigmatise people who are unable to participate in this? Are zero hours contracts progressive? Or, for that matter, 24 hour shops or fast food? Alastair McIntosh, the Lewis-raised environmental activist best known for campaigning against a super quarry on Harris and in favour of a community buyout on Eigg, is against Sunday openings. When I approached him about adapting his book Soil and Soul as a theatre show, he was keen to establish right from the beginning that we wouldn’t be doing any performances on a Sunday. I agreed without hesitation.

Ragwort still needs pulled, however. This might not satisfy some Presbyterians – I’ve discovered that even their website is closed on Sunday, which is admirably committed – but my justification for Sunday weeding was that, while I might be physically exerting myself, this wasn’t ‘work’ in the usual sense, rather a way of mentally resting and reflecting and trying to be in tune with my environment. Also, the idea of a ‘day of rest’ tends to be based on an old-fashioned assumption that ‘work’ is mostly physical. My work is done almost entirely while sitting at a computer, dreaming up ideas, so physical activity that needs a degree of non-creative concentration – like pulling ragwort – is ‘rest’ to me.

And so a lot of thoughts were going through my head as I was pulling ragwort on the Sabbath. I thought about how crofting is a battle against nature that it’s delusional to try and win. Everywhere you go on Lewis you see abandoned tools and machinery, broken fences, crumbling croft houses, all with grass and weeds growing through them, reminders of the temporary nature of all human interventions in the landscape. I thought about how strange it felt to try and nurture the land by methodically murdering something. I thought about how when I moved here I’d idealistically and naively dreamed of somehow leaving my old self behind – to live a life with fewer deadlines, less screen time, fewer distractions from the stuff that really mattered – but had ended up bringing all of this with me. Well, of course I had. I was able to move to Lewis in the first place because, thanks to more widely available wifi, I could do my various jobs as effectively from an island as I could from a city. But I was still in those jobs and reliant on them for income. Also, since I was in the middle of a field worrying about being watched over by tutting Presbyterians, I thought a lot about my religious upbringing, why I had abandoned Christianity, and what it still meant to me.

Gradually, a song emerged, shifting through various different versions before I finally settled on this one. It doesn’t really have a conclusion, by the way. They are largely just thoughts I had, as I had them, edited into shape. I’m not claiming they’re original or particularly profound thoughts either. I just happened to write a song about them, because that’s what I do to try and process what’s going on in my head.

Pulling ragwort on the Sabbath is very much an incomer’s song. I wonder if I’ll look back on it with embarrassment after a few more years of living here, once I’m part of the furniture and no longer care what anyone thinks of me. But it’s sincere and, I think, well meant – it’s a long way from the snarky songs about religion that I used to write as a teenager. If it offends anyone, that wasn’t the intention. Honestly, though, is there any art that doesn’t upset somebody somewhere? And what would be the point of it if there was?

While this is technically my first Lewis song, some music I’ve made has predicted my move here in ways that are a bit eerie. I’ve already written elsewhere about Lake Tahoe, whose video now feels like a strange premonition of my future island life. There’s also Islands of the north Atlantic, a Seafieldroad song recorded five years ago and originally titled Isle of Lewis. This was long before we were even thinking about moving here, or anywhere really, but the lyric is about a family boarding a ferry for a new life. I chose the original title purely because I’d never been to Lewis so it felt more exotic than Skye, Mull or Arran. I basically wrote a fictional song and then my life made it true.

On After All of the Days We Will Disappear, the new album,  Islands of the north Atlantic became the final chapter in a song cycle called The path, the beach, the sea, made up of reworked versions of three Seafieldroad songs – the other two are The Coastal Path, from the second Seafieldroad album and A Port in the Storm from the third Seafieldroad album, The Winter of 88 – plus a new, very brief a cappella section and recordings of the Ullapool to Stornoway ferry, the beach at Portobello and my children singing. All the original songs documented particular points in my life and the idea in putting them together was to create a musical travelogue that begins on a beach in Portobello and ends on a ferry to the Hebrides. Think of it as a prequel to Pulling ragwort on the Sabbath, which is now a part of that journey too.