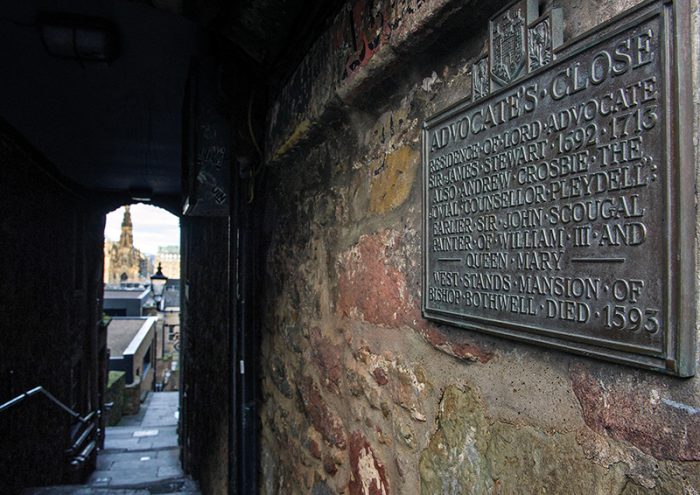 Advocate’s Close and Stamped Addressed Envelope represent two extremes of my songwriting. The first is a throwaway instrumental whose title has no significance beyond being named after the place where it was recorded. The second is so personal that I’m not going to say anything more about it here.

I was always quite pleased by the way one segues into the other though, the almost jaunty piano melody of the first track slowing down until it matches the slow, melancholy pace of the second. It actually sounds like they’re two sections of the same song, but that’s all down to sequencing. They were written and recorded at different times.

The reason this pleased me is because I’m nerdishly obsessed with track-listing. I’m one of those people who spent years making compilations, sometimes for myself, sometimes for other people (whether they asked for them or not). I was, in short, one of those men who read High Fidelity by Nick Hornby and thought, oh god, that’s me. I do think it’s an art though – a great compilation, or just a great album, should take you on an emotional journey, and it’s jarring when track-listing is done thoughtlessly. The order in which songs appear can change the whole meaning of an album, after all. Think of Let It Be…. Naked, which transformed the original Let It Be, partly by taking out Phil Spector’s strings but partly just by putting the songs in a different order. Opening the album with Get Back, for example, suggests from the off that this was the Beatles getting back to the basics of being a live band after the studio experiments of Sgt Pepper and the White Album (they broke up instead, but still).

So I would set myself lots of compiling rules – similar to the rules of script-writing in many ways – based on the idea that an album should tell some kind of story. An opening song should either grab you immediately, and establish a mood, musically and lyrically, setting the scene, or it should work as a short prologue, which is then built on or undercut by the second song (chapter one). Your choice of the penultimate and final song is very important too, this being the end of the story. My ideal scenario is something quite epic as your penultimate song, a dramatic finale, followed by an epilogue-style closer. And I was always very pleased with myself when the final song on a compilation revisited the themes of the opening song in some way, bringing you full circle.

Ok Computer by Radiohead is a classic example of an album by one artist doing this – it begins with a car crash and ends with someone saying ‘idiot, slow down’ – I like to think that the closing song is a premonition of the opening song, and everything in between is Thom Yorke’s life flashing before his eyes as the car tumbles off the road. Another favourite example is Carbon Glacier by Laura Veirs, whose opening and closing songs, Ether Sings and Riptide, mirror each other in their descriptions of people coming back from the dead, either through their children – “souls lost into the ether of death come back wise in the eyes and the arms of newborns” or by a narrow escape from drowning. Both songs were a big influence on Dead Orchestras.

Inspired by albums like these, I went on to obsess over the track-listing for every album I have released, spending almost as much time thinking about what order the songs would be in as I did about the songs themselves. I was particularly pleased with the tracklisting on The Winter of 88, which begins with an island sinking and ends with a ferry journey to a new one.

I wonder if people brought up in the age of downloads still think like this. Has the carefully sequenced album become a lost art? Now you have playlists, on Spotify or iTunes or your phone, that go on for hours, mood-setting music to fill an entire evening rather than 45 minutes. That’s a different kind of journey, one without a clear beginning, middle or end, one more likely to interrupted at any point, by a drunk friend taking over the DJing, or a train arriving at a station. Playlists like these are probably more in tune with the 21st century, and its ambivalent relationship with narrative. Younger generations have been brought up in a post- post-modernist culture that endlessly picks storytelling apart, questioning whose story is being told, why that person gets to tell the story, what prejudices they bring to it, what assumptions are being made about the audience, whether the ending is really the ending etc.

Not that I lacked self-awareness when making my youthful compilations. Among the hundreds of home recordings I made as a teenager was a song about making compilations, in which a boy falls in love and begins making a compilation tape that will perfectly capture every stage of the relationship he’s in – a happy and excited song to capture the first flush of infatuation, an angry song to soundtrack their first fight etc. Listening back over his unfinished project, the boy decides that what the compilation needs is to finish with a sad, reflective song. And so he abruptly ends the relationship. I’m not quite sure why I wrote this song, perhaps as a reminder to myself never to be as horrible as this, to remember to value people and relationships over music. Given that I spent most of my teenage years in my bedroom writing music, I’m not sure I took this advice to heart.