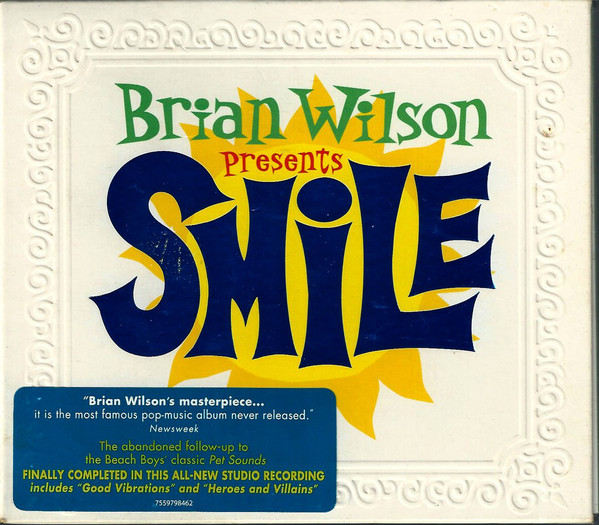 Brian Wilson Karaoke was inspired by the famous saying ‘If you remember the 1960s, you really weren’t there’. I’ve spent more time thinking about this than is probably healthy. What if you don’t remember the 1960s, then? How do you know you were there?

The Brian Wilson in the song isn’t the real Brian Wilson. The giveaway is the line ‘Everyone says they’re me but I know how it felt to write Sloop John B’ – which, as any serious Beach Boys fan will know, is the only song on Pet Sounds that Wilson didn’t write. This ‘Brian Wilson’ probably was there in the 1960s, indulged in every psychedelic drug available, and is now living a mostly housebound life in LA, imagining himself as a former rock star in hiding and mistaking random visitors for fans and journalists. Does he actually believe he’s Brian Wilson or is it just a comforting fantasy? I’m not sure he knows anymore.

I saw Brian Wilson play live in Glasgow a few years ago and the experience stayed with me. Perhaps I caught him on a bad night, in the grip of stage fright – and perhaps I was also projecting my own anxieties about performing – but he seemed oddly absent, staring into space as he sat behind a keyboard that he didn’t appear to be playing very much and which looked like it was there mostly as a protective shield from the audience. His cracked, croaky voice often sounded lost and out of place among his band’s perfect harmonies. He didn’t talk much either, as I recall. I wondered whether the gig would have sounded that different had he not been there. It was like watching a really slick Beach Boys covers band, but with an actual Beach Boy sitting with them, mostly for us to stare at and think ‘wow, that’s Brian Wilson’.

I’d been really excited about the gig. Wilson had recently, finally, completed Smile, the Beach Boys’ famous lost album from the 1960s, and these shows were being celebrated as a wonderful creative rebirth. At last Wilson had conquered his demons and finished his masterpiece. But in some ways this felt like a collective act of wish fulfillment. The Smile that Wilson finally released, after all, was really a cover version of Smile, by someone so traumatised by the original recording process that he’d forgotten about a lot of it and had to be reminded of what he’d been trying to achieve by his lyricist Van Dyke Parks, and a new group of musicians who were clearly Beach Boys fans and invested in the project for their own reasons. And it wasn’t entirely clear how Wilson really felt about it all, at least judging by his behaviour in media interviews. Was it as therapeutic as his fans wanted to believe it was? Who knows?

Years before Brian Wilson Presents Smile was released, I remember friends who were obsessive Beach Boys fans talking reverentially about this lost masterpiece, like Indiana Jones discussing the Ark of the Covenant or the Holy Grail. I was happy to join these conversations, it was seductive, but to me it felt a bit like a Macguffin, like the Ark or the Grail in the movies. If I was honest with myself, what was most exciting about Smile wasn’t the possibility of actually hearing all this music, as beautiful and extraordinary and groundbreaking as it was, even as sketches, but the journey, the act of imagining an alternate universe in which Smile had been released, and the immediate cultural impact it could have had.

I wonder if any of that really matters though. In historical terms, Smile already existed in all the ways that did matter. Bootlegs that pieced together what the album might have sounded like had been widely circulated for decades, and had been a huge influence on most of the same musicians who would have been influenced by a completed version. Would the course of musical history really have been all that different had Smile been released in its finished state? Is it possible that Smile was actually more influential for not being finished, more powerful as a myth than as reality? And does it have the same power now? I realised while writing this that I’d barely listened to Brian Wilson Presents Smile in the ten years since I wrote Brian Wilson Karaoke. I hadn’t even remembered that a follow-up to Wilson’s version, a reassembled collection of original recordings called The Smile Sessions, had been released not long afterwards. By that time I must have lost interest. I’d already finally heard Smile. Box ticked. Film over.

Neil Tennant (yes him again) once joked that big celebrity fundraisers like Live Aid might be better if all the singers just walked on stage naked, stood there for a bit, and then walked off again. His point (I think) was that what we mostly want as audiences is to enjoy music on our own terms but occasionally get to gawp at the people who make it.

I wonder if that’s true. When thousands of people watch a hologram of Elvis accompanied by a real band, faithfully recreating his live shows, is it enjoyable because people who never saw him perform in life get to experience something close to the real thing? Or is the important thing about the show not the authenticity of it but the act of imagination involved, the indulgence of your own Elvis fantasies? If you watch your favourite singer on stage, in real life, isn’t that also an act of imagination, in which you project your own needs and desires, reflected in the way their music speaks to you, on to a stranger? And if so, does it ultimately matter whether that stranger is actually on stage or not? We tell ourselves that we’re making some sort of human connection with them but are we, really?

One of my favourite responses to the first Seafieldroad album was from someone in America who had been listening to it in the car every day on the way to see his mother in hospital – the journey time being about the same length of the album – and found it comforting. I remember being very touched by this but also perplexed. I couldn’t think of any song on the album that was written about anything resembling that experience. If anything it’s mostly about fatherhood and being in love. He seemed to have heard a completely different album to the one I’d made. Was that a human connection? Actually I think it was; there’s something about sharing music that is so fundamental to human experience that it’s vanity to claim any of it as your own. It just wasn’t quite the human connection I’d imagined when I wrote those songs.

A confession: I’m currently going through a bit of a crisis of self-belief as a result of a much needed reality check. This will be a good thing, in the long term, but at the moment it’s a lot to process and so perhaps all the thoughts above aren’t as coherent as I’d like them to be. I thought I remembered significant events in my life with a reasonable amount of clarity but perhaps I didn’t at all. I’m suddenly seeing some memories from a different and often unflattering perspective, like one of those films in which you watch the same scene again and again from different angles, and each time a deeper meaning emerges.

The writing of this song is one of those memories. At the time I didn’t see anything of myself in this character, it just seemed like a fun conceit. Now though I do feel a bit like my ‘Brian Wilson’. I’m in a fog, wondering how far my capacity for self-delusion goes and to what extent I am the person I thought I was. I wonder whether I was sending myself some sort of subliminal message when I wrote this song, whether I was aware of what I was doing in my life on some level but wasn’t able to articulate it consciously, and whether I was doing something similar by also writing two songs about fakesters. Perhaps the song doesn’t mean what I think it means at all, even to me.