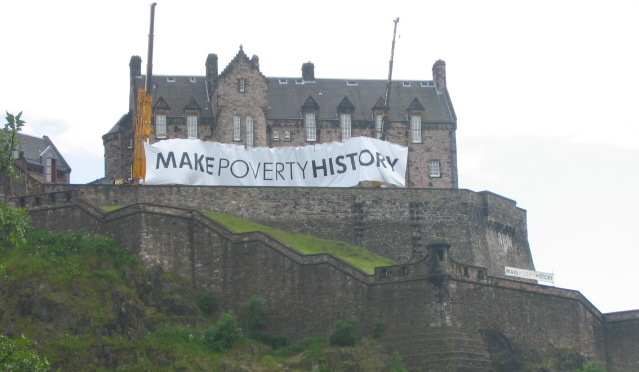 The Dark Ages was written in response to two events – the Make Poverty History march in Edinburgh on 2 July, 2005, when 200,000 people formed a human chain around the city in an attempt to persuade G8 leaders to cancel debts owed by the world’s poorest countries, and the London suicide bombings five days later. I remember the march as a hopeful, joyful experience – one of those rare days when, as the song puts it, ‘it feels like the earth could be moved if we all shoved hard’. And I remember how the horror of the bombings punctured that optimism.

This emotional response is one I questioned even at the time. On any day of the week, a horrifying event and a hopeful event are happening in the world simultaneously, and one shouldn’t negate the power of the other. But somehow the London bombings felt like a slap across the face of the march. In Edinburgh (among numerous other cities) hundreds of thousands of people had stood up to the leaders of the world’s most powerful governments and told them that the way they were treating the world’s least powerful people was unacceptable and had to change, and they actually seemed to be listening. Five days later, hundreds of ordinary British people were attacked indiscriminately on the grounds that they were “directly responsible” for the British government’s actions, purely because they lived here. You could have taken part in the G8 protest or the march against the Iraq war two years earlier, you could have gone on countless other demonstrations or spent your whole life campaigning against governments you didn’t vote for, and you’d still be a target. The 52 dead included people from Afghanistan, France, Ghana, Grenada, India, Iran, Israel, Italy, Kenya, Mauritius, New Zealand, Nigeria, Romania, Sri Lanka, and Turkey, which just made the whole thing even more absurd and cruel.

I kept thinking about my three-year-old daughter, my only child at the time, and wondering what sort of world she was growing up in and how she might cope. She was, obviously, far too young to understand what was going on, so The Dark Ages imagines her as a young woman, alternating, like I was, between hope and despair at the state of the world and an individual’s power to do anything significant about it. It pictures her on a similar march, feeling suspicious of protesters’ motives, concluding that “they just came here for the pop songs, they just came to feel less scared, and to feel someone else will take care of the problem”. And then it hopes that she’ll overcome that cynicism, because if she doesn’t then “the dark ages will really have got her”. It ends on an optimistic note: “She will learn to feel less hopeless at the lack of maps or torches. We gave it our best and i know that she’ll make us proud.”

The line “they just came here for the pop songs” was a reference to the Live 8 concert that happened the same day as the march. I remember feeling quite conflicted about this, thinking that while the Live 8 spectacle with its celebrity attendees was probably helping get the march more attention, it was also overshadowing and perhaps even cheapening it.

I was also questioning my own motives for attending demonstrations. The last big one I’d been on was the one against the Iraq war in February 2003, which took place in 600 cities and was later described as ‘the largest protest event in human history’. I’d actually forgotten it was that big. Three million people attended the march in Rome alone, itself the biggest anti-war rally in history. I went to the one in Glasgow; there is a photo somewhere of my one-year-old child on my shoulders outside the SECC where the Labour Party, then in power, were in conference. Soon afterwards the USA, with the UK’s support, invaded Iraq anyway. It’s often been suggested that this had a profound effect on a lot of people’s political views – if elected politicians could just ignore a protest on that scale, what was the point in trying to persuade them of anything?

For my part, one result was that I went to the Make Poverty History march with no great expectations. Mostly it was an excuse to spend the day in the park with some friends; it obviously helped that it was July, and sunny. As it turns out, there has apparently been at least some progress on quite a lot of what was asked for that day – in a 2015 article to mark ten years since the protest, the executive director of One argued that eliminating extreme poverty worldwide was now an achievable goal. “Nobody now says it cannot be done,” he wrote. “The question is whether we will choose to do it.” (That second sentence is the crucial one, of course – stopping global warming would also be achievable if only we chose the necessary steps.)

I still think The Dark Ages is one of the best songs I’ve written (unusually for a Swimmer One song, it started out as a piano song by me that Hamish gradually built up into something much more layered). It’s not a protest song or a political song (not that I have anything against those), but I think it’s a good example of songwriting as social history, recalling a historical event from an ordinary person’s perspective in the way that folk songs often do. Obsessive Pet Shop Boys fan that I am, I often find myself judging my own songs based on whether they tick a particular Pet Shop Boys box. The Dark Ages is probably the closest I’ve got to making something like Suburbia or King’s Cross, both documents of life in Thatcher’s Britain.

It also has a pretty great four-part harmony at the end of the middle eight.